How will a 200 million man Chinese army get to Israel? 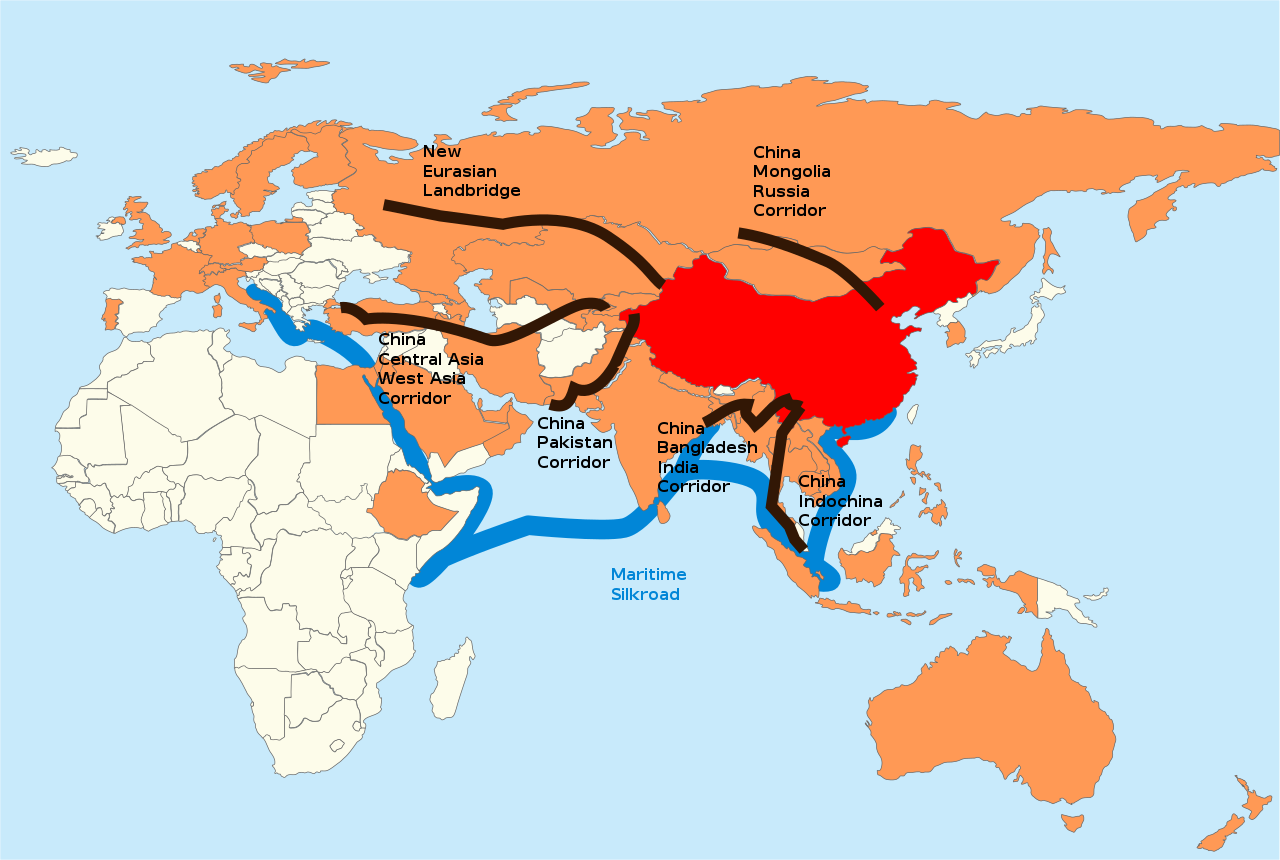 “And the sixth angel sounded, and I heard a voice from the four horns of the golden alter which is before God, Saying to the sixth angel which had the trumpet, Loose the four angels which are bound in the great river Euphrates. And the four angels were loosed, which were prepared for an hour, and a day, and a month, and a year, for to slay the third part of men. And the number of the army of the horsemen were two hundred thousand thousand (200 million): and I heard the number of them.”

“And the sixth angel poured out his vial upon the great river Euphrates; and the water thereof was dried up, THAT THE WAY OF THE KINGS OF THE EAST MIGHT BE PREPARED (capitals mine).

Can you imagine how this prophecy, made in approximately 95 A.D. when the world’s population was not even 200 million (it is estimated there were 150 million people in 1 A.D.), must have sounded to all who heard it? How could there 1.) be an army 35% larger than the entire population of the world and 2.) how could they march from the east towards Israel? To put it in today’s perspective, there are nearly 8 billion people living on the earth. If someone told you an army of almost 11 BILLION (8 billion X 135%) from the east will march towards Israel AND they would also be destroying one third of all mankind on their way, what would you think? Also, remember John was told to write down what he heard. He HEARD the number of the army from the east as being two hundred thousand thousand (200 million) from Jesus Himself!

To answer the second part first, in 2011 China boasted they now have an army of 200 million soldiers. Not 100 million! Not 150 million! They today have a 200 million man army EXACTLY as the Bible said they would have! Couple that with their nuclear capabilities and their long desired wish to create a utopian, global communist world says TODAY they could fulfill this prophecy which only 50-70 years ago was absolutely unthinkable. Does anyone else see the prophetic significance that the Chinese Communist Party took control of China at approximately the SAME time Israel was being formed as a nation (1948)?

Now, to be fair, another possibility could be a Muslim army of 200 million, again coming from the east. There are valid arguments on both sides. However, today the OIC (Organization of Islamic Countries) is made up of 51 countries with approximately 1.3 billion inhabitants, yet they only field armies totaling 5 million soldiers. Let it suffice the Bible says an army of 200 million soldiers will attack Israel in the Last Days after killing one third of mankind on their way. I favor China as the culprit since we know Armageddon will initially be considered a “power grab” by the countries of the world not under the control of the anti-christ at the time who will go on to fight each other for their ultimate global superiority. China doesn’t seem like a country willing to give up its independent status to be part of the anti-christ’s One world government.

In order to answer how they would physically get their army to Israel (besides crossing over a dried up Euphrates River), let me ask you a question. Have you ever heard about “One Belt One Road” (aka OBOR)? This is a global project developed by the Chinese government in 2013 to basically ‘rebuild” their former Silk Route which allowed them to move their goods to the West. They have now invested in almost 78 countries in order to develop a road and rail system enabling them to securely and economically ship their materials quickly to Europe, Russia and Africa. The map above shows the expected routes to accomplish their goals and you can easily see in order to get to Europe, they must pass over the Euphrates River! Having a road and rail system will enable them to quickly move many goods to the world, including THEIR army of 200 million men. It is interesting that just in the past couple of weeks, with the evacuation of the U.S. from Afghanistan and the Chinese endorsement of the new Taliban government, it definitely seems Afghanistan will soon have a Chinese road and rail system traversing their country.

While the goal is to have these paths completed by 2049 (the 100th anniversary of their founding) the Chinese have been working on his for a few years. With the dependency of the rest of the world on Chinese goods, along with the decline of U.S. influence, a good part of this initiative will be completed long before 2049.

So, when will this happen? I personally find it interesting in Revelation 9:15, Jesus said “And the four angels were loosed, which were prepared for an hour, and a day, and a month, and a year, for to slay the third part of men.” There is a very specific time set by God when this will happen. Do you remember what else Jesus said in Matthew 24:36? But of that day and hour knoweth no man, no, not the angels of heaven but my Father only.”

“But of that day and that hour knoweth no man, no, not the angels which are in heaven, NEITHER THE SON (capitals mine), but the Father. Take ye heed, watch and pray: for ye know not when the time is.”

These two scriptures, along with the opening verse, point to a number of certain facts. First, 200 million soldiers will be released by the angels of God to march westwards towards Israel and to also destroy one third of mankind in this epic trek. Secondly, their release has already been preset by God down to “…an hour, and a day, and a month, and a year.” In God’s Ultimate Plan for us and for the world, we were told 2,000 years ago the EXACT time has already been set! We don’t know it but God does! Third, the number of 200 million is NOT a guess! John wrote that he heard the number directly from Jesus. This tells me of the significance and we should recognize it will occur only when an army of 200 million is ready to go! Finally, in Jesus’s comments in both the Books of Matthew and Mark, He tells us NO ONE will know the hour and day when this will happen. Man will not know it. The angels in Heaven won’t know it. Jesus Himself will not even know it. Only God the Father knows when this will happen! But, we are still warned to “…take heed, WATCH AND PRAY (capitals mine): for ye know not when the time is.” Jesus further clarifies this message is NOT just for Believers but is intended for ALL:

Regardless of whether these soldiers are from China or are a combination of Arab country’s armies, we are told in the Book of Revelation they will march towards Israel before the start of the War of Armageddon. In order to get there they will have to cross the Euphrates River, one of the longest rivers in the Middle East. It begins in eastern Turkey, flows through Syria and Iraq (on Israel’s northern and eastern sides) and eventually empties into the Persian Gulf. A view of any Middle East map indicates whoever comes from the east going west MUST cross the Euphrates River in order to get to Israel. God, in His Wisdom, will make it “easy” for them to get there and once and for all put an end to sin in this world and finally defeat the anti-christ.

“And the sixth angel poured out his vial upon the great river Euphrates; and the water thereof was dried up, that the way of the kings of the east might be prepared.”

So, whether the river dries up because of a drought, a dam, or some other miraculous happening, this army with their tanks, supplies and men will cross the Euphrates on their way to Israel and Armageddon and their ultimate destruction by Jesus at His Second Coming. While we will not know the exact timing of this, as the Bible clearly tells us TODAY, we are told to WATCH. When China, as the only country in world history, claims they can NOW field an army of 200 million soldiers as predicted 2,000 years ago, we should be watchful TODAY! Jesus’s Coming is soon! It is these prophecies made thousands of years ago which we are all see happening with increasing frequency and intensity in our lifetimes that gives me a great amount of comfort. Comfort in knowing my God is Supreme and has an ultimate Plan for the defeat of sin and the gift of eternal salvation for those who believe in Jesus. It is this comfort that continues to encourage me to acquaint as many as possible about the signs of the Last Days and in doing so, to not frighten anyone, but rather to “…therefore comfort one another with these words.” Folks, the time is coming soon when it will be too late to miss the Wrath of God. As quoted above, we must be watching and praying! We can do this right now by accepting that Jesus Christ died for our sins and by rising on the 3rd day and us accepting this, we will be saved for eternity. We all do not have much time to tell others before the army starts marching! I sincerely hope you share these comments with your friends and loved ones to save them from the Wrath which is coming.

May God Bless you as you tell others of His Plan and their opportunity to be saved.

This site uses Akismet to reduce spam. Learn how your comment data is processed.